Power Chords for the Guitar: Guitar chords for Rock and Roll

Power chords are variations of ordinary chords. There are hardly any songs in the rock genre that are played without these chords. They are a simple type of guitar chord with just two notes, a fifth apart. For example, an A power chord is made up of the notes A and F#. Power chords are often used in rock music. Let's start learning Power chords on your guitar!

In the following clip you will find everything you need to know about power chords:

What are power chords?

Power chords are guitar chords. They are often used in the rock or metal genres. You can get a powerful and full sound without playing the full versions of chords. Even though the tones are distorted, they sound coherent.

To play power chords on a guitar, you need to hold down the root and fifth notes of a chord at the same time with your fingers. For example, if you want to play the E major chord, you need to press down the root (E) and fifth (B) strings with your left hand. A big advantage over barré chords is: They are easy to learn and play.

A power chord is structured as follows:

Because they are using the fifth, power chords are also sometimes called fifth chords. The octave above the root note gives the guitar chord even more power.

Unlike conventional chords (triads), power chords do not use the third, as this would make the chords sound muddy and undefined.

Power chords are not only universally applicable, but also incredibly easy to grip.

Tip: With power chords, strike only the fingered strings. No empty strings are played.

In the following, we describe the two most common types:
E-shape and A-shape.

A-shape
Put your index finger (2) on the root note – the A-string.
Put your ring finger (3) on the D-string a fifth higher.
Put your little finger (5) on the G-string.

In the following table we have compiled the most important power chords for you. In the table you can find the power chords as tabs. 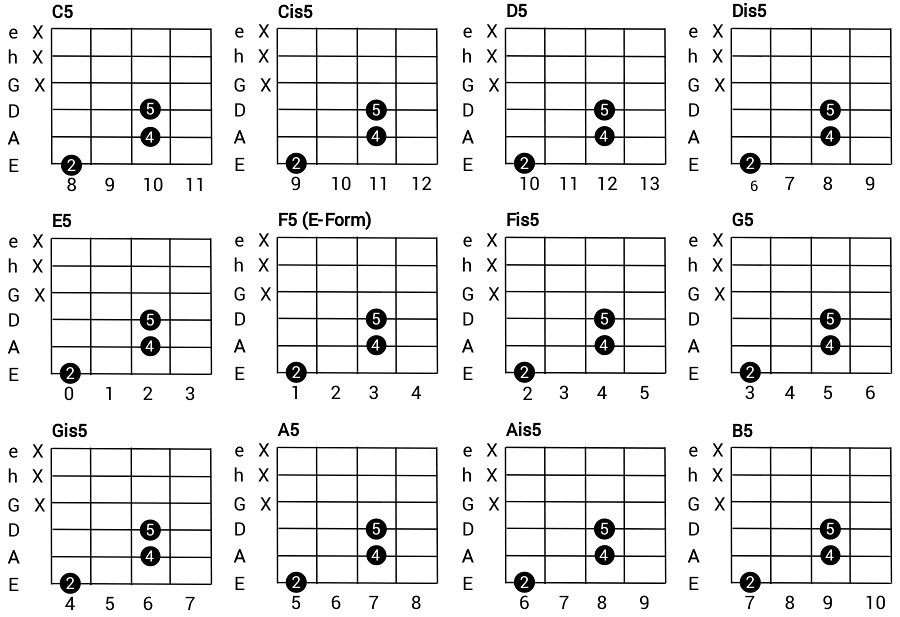 You love melancholic music like the soundtrack from The Fabulous World of Amelie? Learn to play the minor scale and get to know the base for many songs.

Learn guitar
String bends on the electric guitar: pulling strings like a pro

Bending is an essential technique for rock and blues. Learn how to pull the strings on the electric guitar. Plus: 6 tips for improving your technique.

Learn guitar
Changing the strings on acoustic and electric guitars

We will show you how to put on the strings of your classic guitar or electric guitar in just a few steps.